Grasslands and meadows in England are man-influenced habitats that need some form of management if you want to keep them grassy and avoid habitat succession and a progression to woodland. But methods and timing can make the difference between wrecking a habitat and maintaining its ecological integrity

Looking back through the prism of late middle age, I think the truth is I hated school. Not just disliked it, but hated it. My last and worst experience was at Queen Mary’s in Basingstoke, a Grammar School that thought it was a minor Public School. It wasn’t the institutionalised bullying, or the sadistic masters and prefects that I loathed. It was the tedium. True, I can see now that the three Rs have stood me in reasonably good stead over the years, but overall what I was being taught was poles apart from what interested me. Consequently, it was the summer holidays that I looked forward to and that’s when I cut my teeth in the natural history world.

Typically, summer holidays meant a couple of weeks of enforced family ‘enjoyment’, usually in Devon and frequently cut short due to persistent torrential rain. The rest of the six weeks – most of August – were mine to enjoy alone, and these were times that I spent, dawn to dusk wherever possible, exploring the countryside and the wildlife of north Hampshire. Understandably perhaps, the August Bank Holiday weekend is a poignant anniversary for me nowadays, and always evokes a sense of Proustian nostalgia – the end of an era, and a yearning for things past and forever lost.

In my early teens, growing up in the late 1960s and early ‘70s, I was restricted to areas that I could reach on foot or by bike; living on the outskirts of what is now modern Basingstoke meant that grassland habitats were what I visited most. As a result I learned to love meadows and still do: manmade and man-influenced they may be but for me they are gems in our natural heritage.

Given that self-interest and greed (sorry, the desire to build a better future) are the driving forces behind the exponential expansion of the obscenity that is modern Basingstoke, it is hardly surprising that all the meadows I grew up with are now destroyed. But I still remember them fondly, and I also remember that until it was time to go back to dreaded school they remained uncut, full of flowers, and home to a succession of butterfly species and an abundance of other insects. They were simply fantastic, and full of interest for a curious mind.

Above: The memory can play tricks of course, but this is what I recall meadows were like during school summer holidays half a century ago. Paul Sterry/Nature Photographers Ltd

Earlier this year a wave of nostalgia came over me and I thought I would visit some old haunts. It’s been a busy year for me so back in July I asked a favour of friend: to save me time please could you see if a particular meadow near me was in good order and worth visiting from a floral point of view. The field in question is called Ron Ward’s Meadow; the area is designated SSSI and ‘managed’ by the Hampshire and Isle of Wight Wildlife Trust. As it happens I knew the Ron in question, back in the days before the meadow was designated and prior to his death some 28 years ago. At that time his field was a wonder to behold and typically remained uncut until flowering had finished, which varied from year to year; the hay was then cut and a few head of cattle were deployed for a brief period. Ron was a true Tadley character (he is buried adjacent to his beloved meadow) who was interested in wildlife but not really a naturalist in the accepted sense; for recognition of the meadow’s biodiversity significance, its designation and subsequent appropriate management we have the late Dr Peter Brough to thank for that.

Anyway, the friend in question lent over the gate and sent me a picture of Ron’s meadow. I was dismayed with what I saw although I suppose I shouldn’t have been surprised – I live near Basingstoke after all, a town where environmental life is full of disappointment. But given that it was still July and other wildlife-rich meadows in the neighbourhood were still flourishing and in full bloom, the sight of Ron’s ‘nature reserve’ cut to within an inch of its life was shocking. Before the school holidays had even started the wonders of an English meadow had been removed and there was no chance that the next generation of naturalists – on their school holidays – would gain any insight into what that particular meadow should look, sound or smell like. 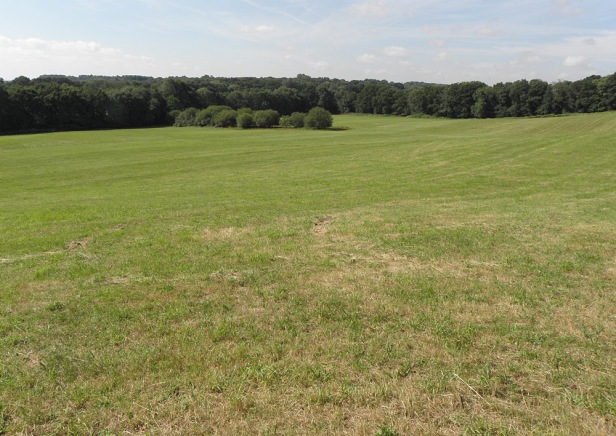 Above:  Subjected to the conservation equivalent of OCD, this was Ron’s meadow on 24th July 2019. Cut down in its prime, no doubt it now meets the requirements for Natural England’s ‘favourable condition’ status.

A few weeks later, in mid-August, I found time to visit another area of SSSI grassland, located within 500 metres of Ron Ward’s Meadow. Thankfully this is in private ownership and had remained uncut; it was full of late-season flowers, with a myriad butterflies on display and alive with the sound of insects. In addition to its floral and invertebrate life, these meadows harbour thriving populations of Adder, Grass Snake, Slow-worm and Common Lizard (I saw all four species on my visit) not to mention Harvest Mice whose nests are visible and tolerably common. Not much chance of those surviving the mechanised blitzkrieg imposed on poor Ron’s meadow I suspect.

Above: Taken on 10th August, the benefits to wildlife of not cutting meadows prematurely were evident in fields not far from Ron’s grassland. That charming plant Betony (left) flowers in profusion throughout August and is popular with Brimstone butterflies and many other insects; and the flowers of Hogweed (right) are a magnet for all manner of pollinating insects, including the beetles, and tachinid and muscid flies seen here. Paul Sterry/Nature Photographers Ltd

I looked at the Wikipedia entry for Ron Ward’s Meadow and found that it was ‘managed for hay production’. Of course, if you want meadows to remain grassland, and to prevent succession towards scrub, they need cutting. And I understand the concept of ‘making hay while the sun shines’ ie when the grass is dry. But I would suggest that the question is one of timing and method. If you want to maximise biodiversity, rather than hay production, then there might be a case for a more enlightened, less prescriptive approach to be adopted.

Above: Meadow anthills take years to develop. I doubt the foot-high ones found in meadows managed for wildlife near me, and in my garden ‘meadow’, would fare well under the OCD approach to grassland management favoured by some. Paul Sterry/Nature Photographers Ltd

In a modest way I manage my garden as a meadow. I have the advantage of course of being able to do this on a small scale, by hand.  But like friends who own more sizeable areas of grassland near me, including those other SSSI meadows I mentioned, I manage for wildlife, not hay production. Maybe this should give Wildlife Trusts and Natural England, with its obsession for perceived ‘favourable condition’ status, pause for thought? When it comes to habitat management, especially grassland, one size does not fit all. So maybe cut later, set the grass-cutter higher, and adopt a mosaic approach, cutting different sections every other year? When I look again at the image of Ron’s meadow I feel a sense of loss. ‘À la Recherche du Temps Perdu’ as the man said – times past indeed.

Above: My garden ‘meadow’ on 24th August. The first year I cut my garden’s ‘meadow’ I used a strimmer and inadvertently sliced a Grass Snake in half. Since then I have done it ‘by hand’ using shears – a laborious process but at least I can manicure the increasing numbers of anthills, and avoid patches of significant plants, not to mention the small mammals, reptiles and amphibians that call my garden home. I am just starting to cut the grass now, on 26th August. Paul Sterry/Nature Photographers Ltd

One thought on “Grassland Management – the first of two articles, this one taking a quizzical look at cutting, by Paul Sterry.”